This October, Matthew Lutz-Kinoy will launch Cranford Collection’s new Link Room Project with an exhibition of ceramics and paintings informed by the British Slipware tradition. To create a dialogue with the changing collection exhibitions at Gloucester Gate, and to activate the spectacular link room designed by Gabriel and David Chipperfield, Cranford Collection is inviting artists to create a special project ​​for the space.

Since 2010, Matthew Lutz-Kinoy has collaborated with artist Natsuko Uchino to create banquet sets of ceramics including plates, bowls, platters, pitchers, cups and utensils under the title Keramikos. The duo explores notions of society, religion, politics, style and technique incorporating the long history of ceramic production from Hispano-Moresque, Byzantine, Islamic, Chinese, Japanese and Korean traditions. Cranford’s invitation has led Uchino and Lutz-Kinoy toward the British Slipware tradition. This form of decorative earthenware was traditionally lead-glazed and ornamented with coloured slip. Slip is clay and water mixed together into a creamy consistency. It is usually of contrasting colour to the body of the vessel. Appearing to have originated in the Far East, where fragments of red-slipped pottery are thought to be 5000 years old, the use of slip as a decorative technique has been practiced in ceramics since early civilization. In the West, examples of white-slip decoration date from 2000 B.C. in the Minoan culture on the island of Crete. By the mid-1600s, slipware manufacture was well established in many centers in England, and it is in England that the technique reached its height of skill and excellence, never attained elsewhere. The oldest and, perhaps, most vibrant of the English folk pottery traditions, these slipwares illustrate a freedom of expression and imagination.

Lutz-Kinoy and Uchino’s slip decorated plates draw on a rich artistic dialogue between Japan and England. In the 20th Century when Bernard Leach invited Hamada Shôji to develop Leach Pottery St. Ives in Cornwall, they experimented with developing techniques based on surviving examples of slipware ceramics. Leach and Hamada claim to have learned how to achieve decorative motifs by observing the patterns made by blackberry jam and Cornish clotted cream spread on a slice of toast. The motifs on this new banquet set of ceramics produced by the artists extends this tradition of historical research and collaboration. This rich local history has inspired the artists to create a collection of ceramics that mixes abstract and figurative motifs and incorporates a tongue-in-cheek humour which is specific to the British slipware tradition. This series was produced locally at the ceramics studio at Camden Art Centre.

A series of large paintings, standing lamps and tablecloths by Lutz-Kinoy inspired by the slipware ceramic motifs will wrap the link room into a space of aesthetic and social experience where special events will take place through the Autumn. Cranford Collection is thrilled to offer a platform to share Lutz-Kinoy’s ability to reconcile and celebrate through spectacular and open works. 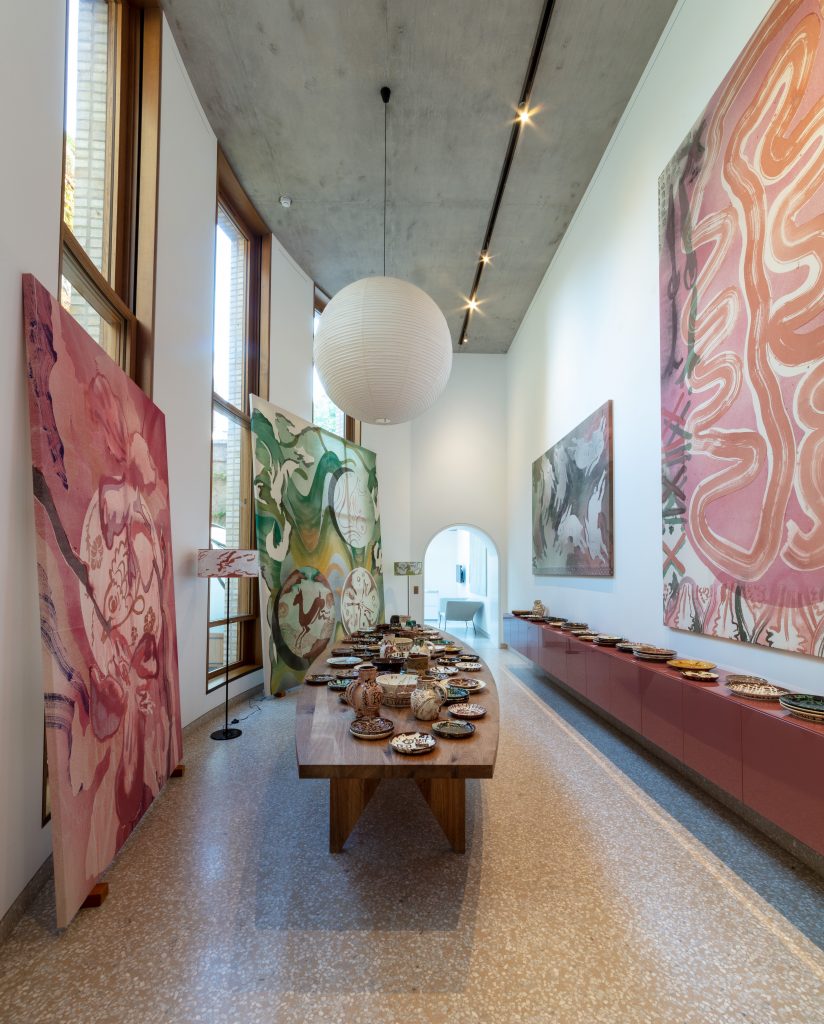 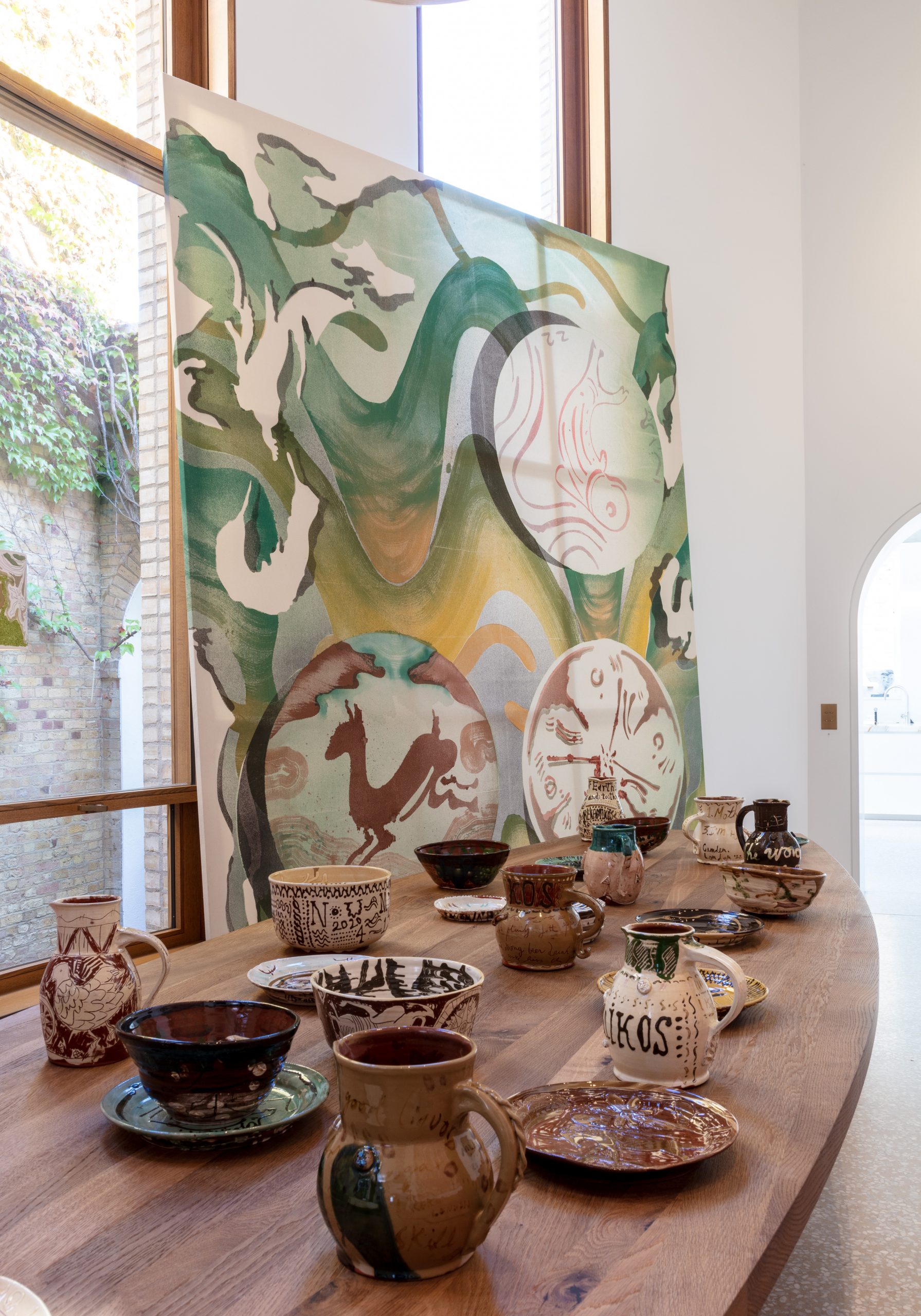 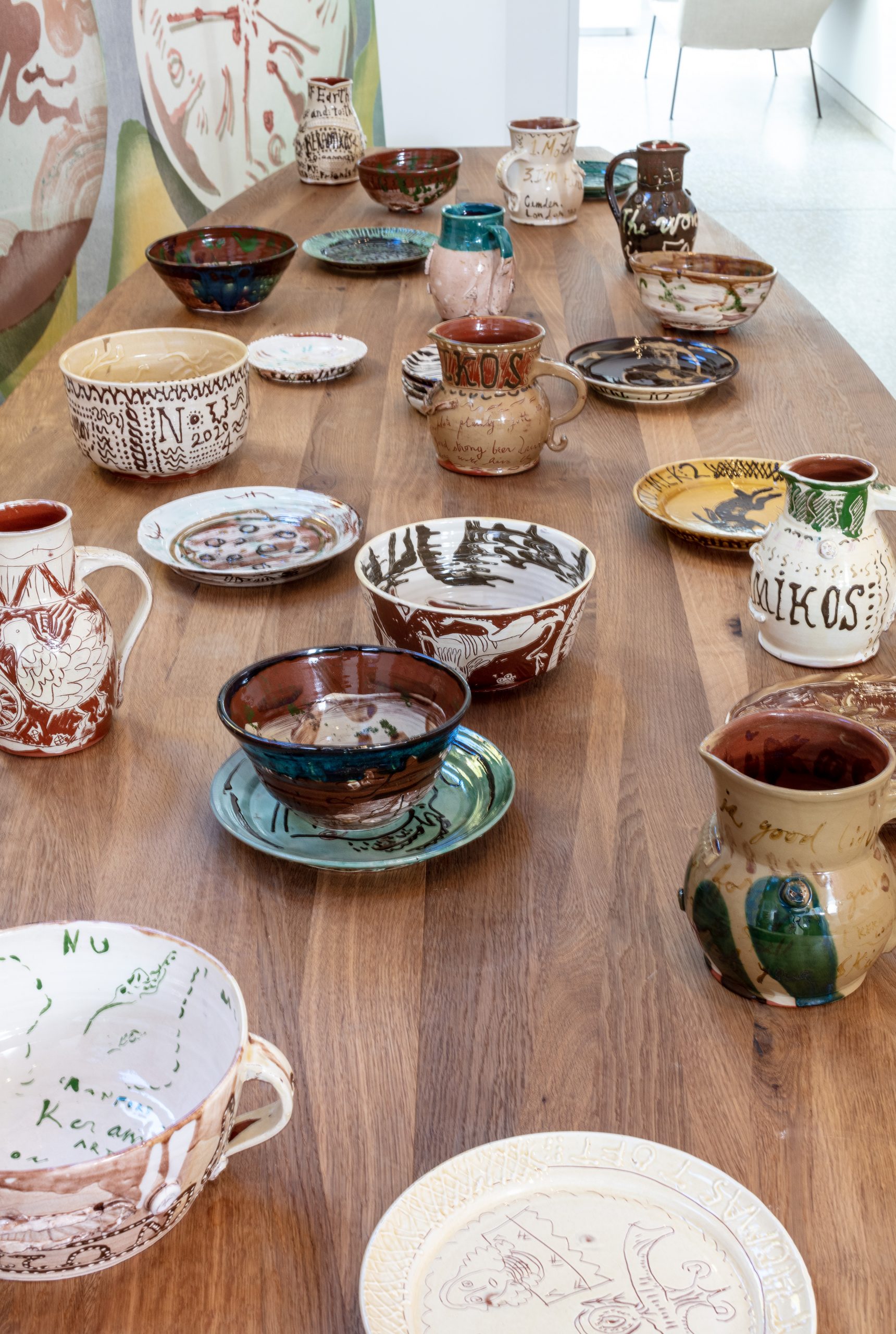 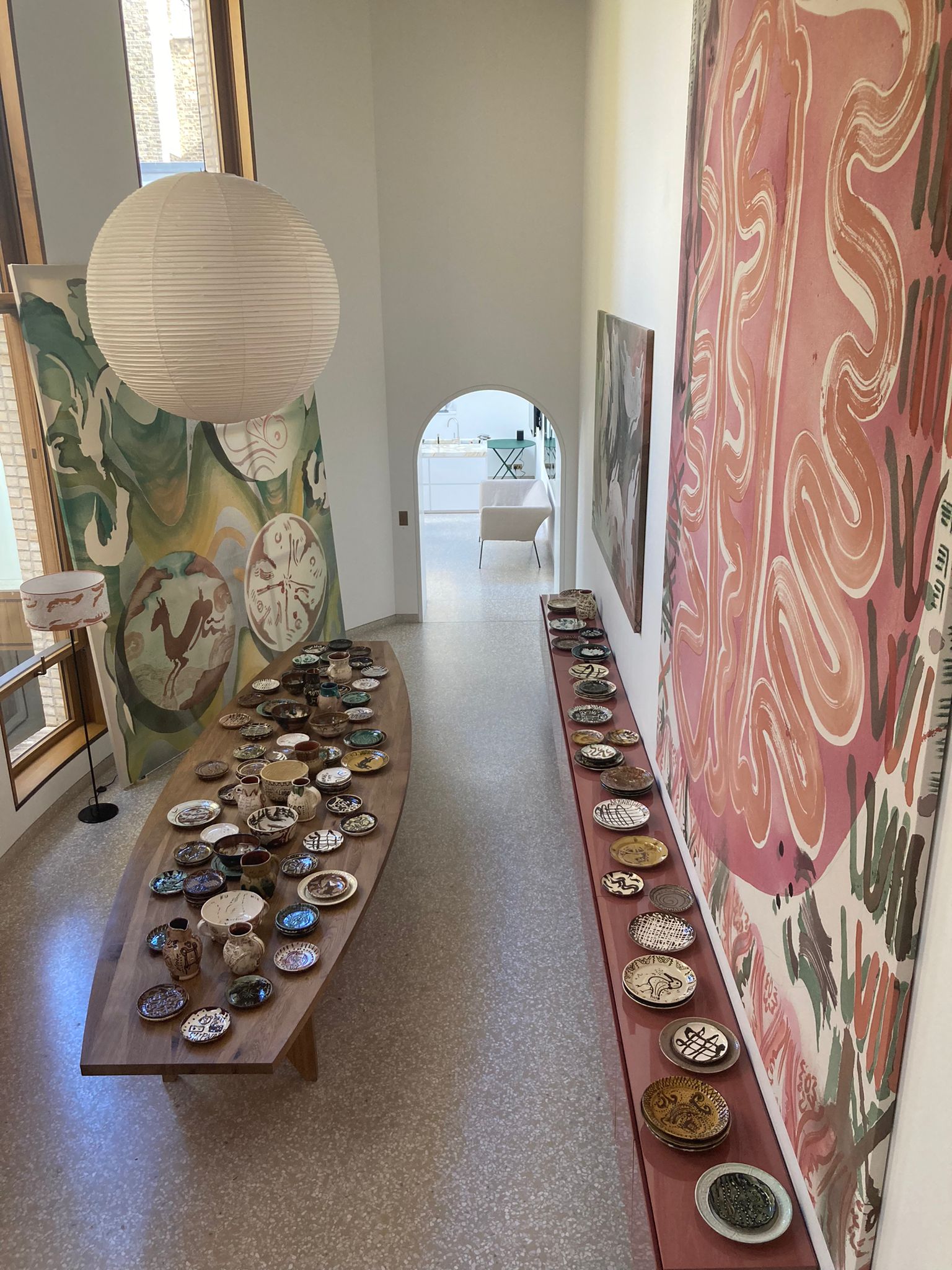 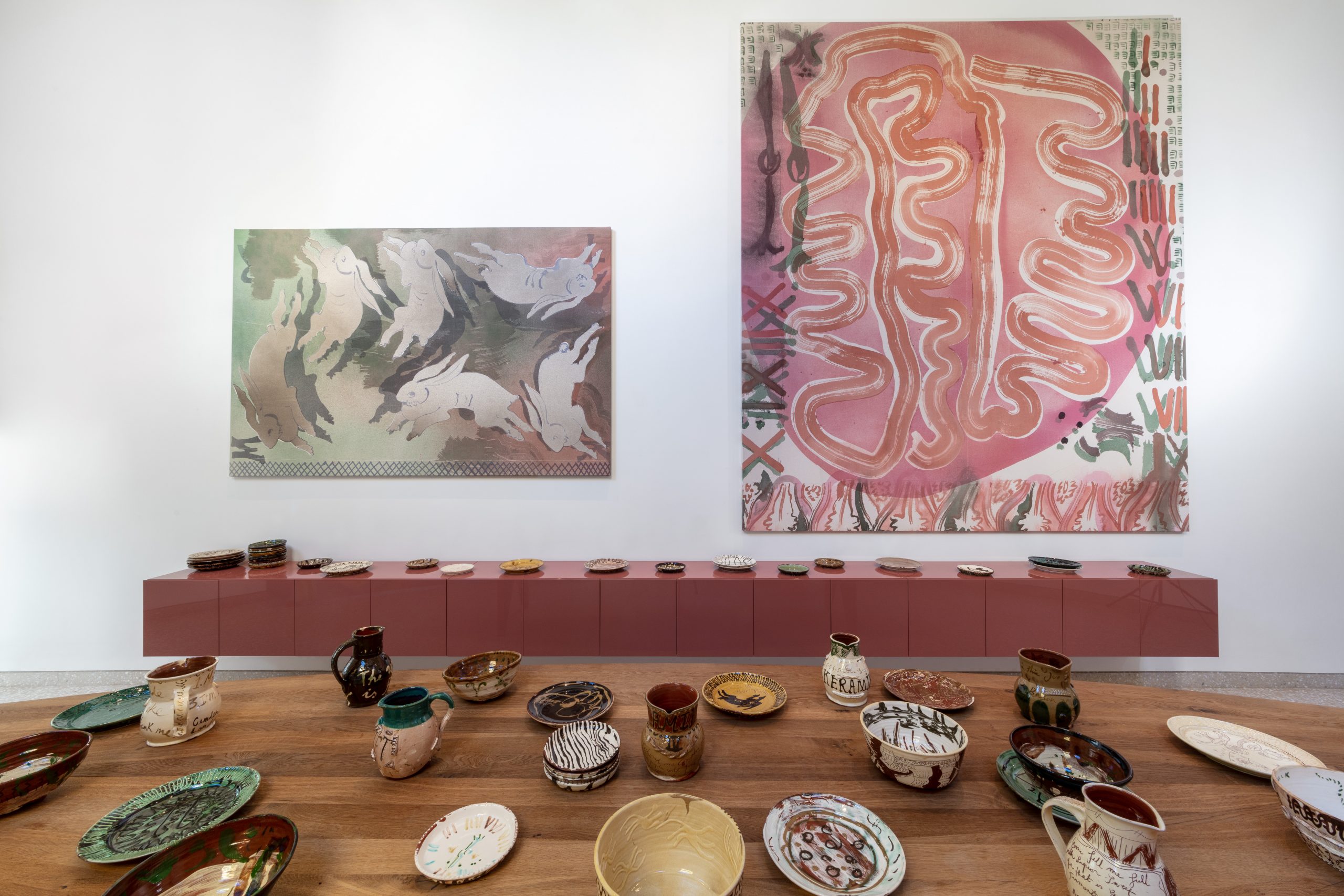 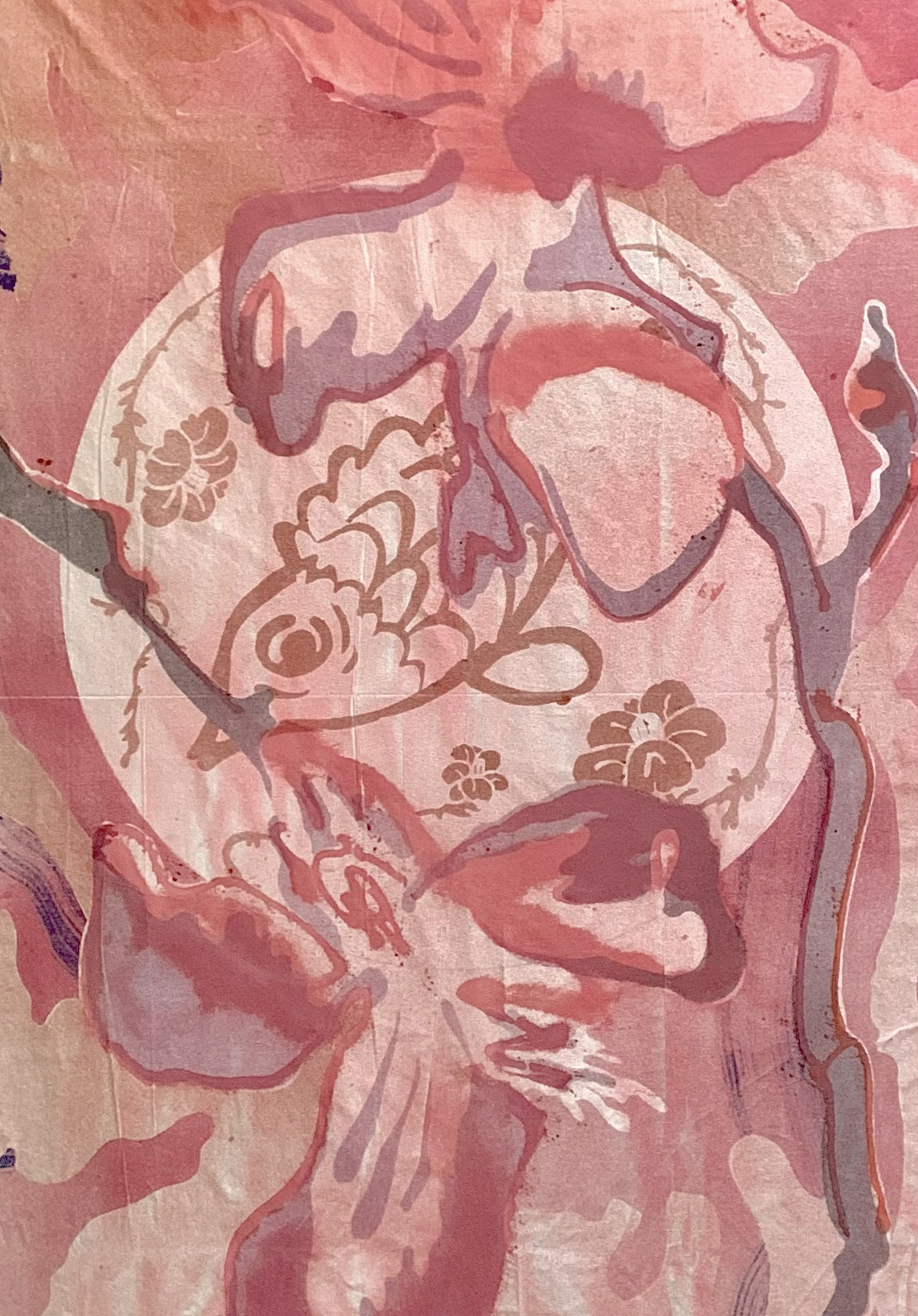 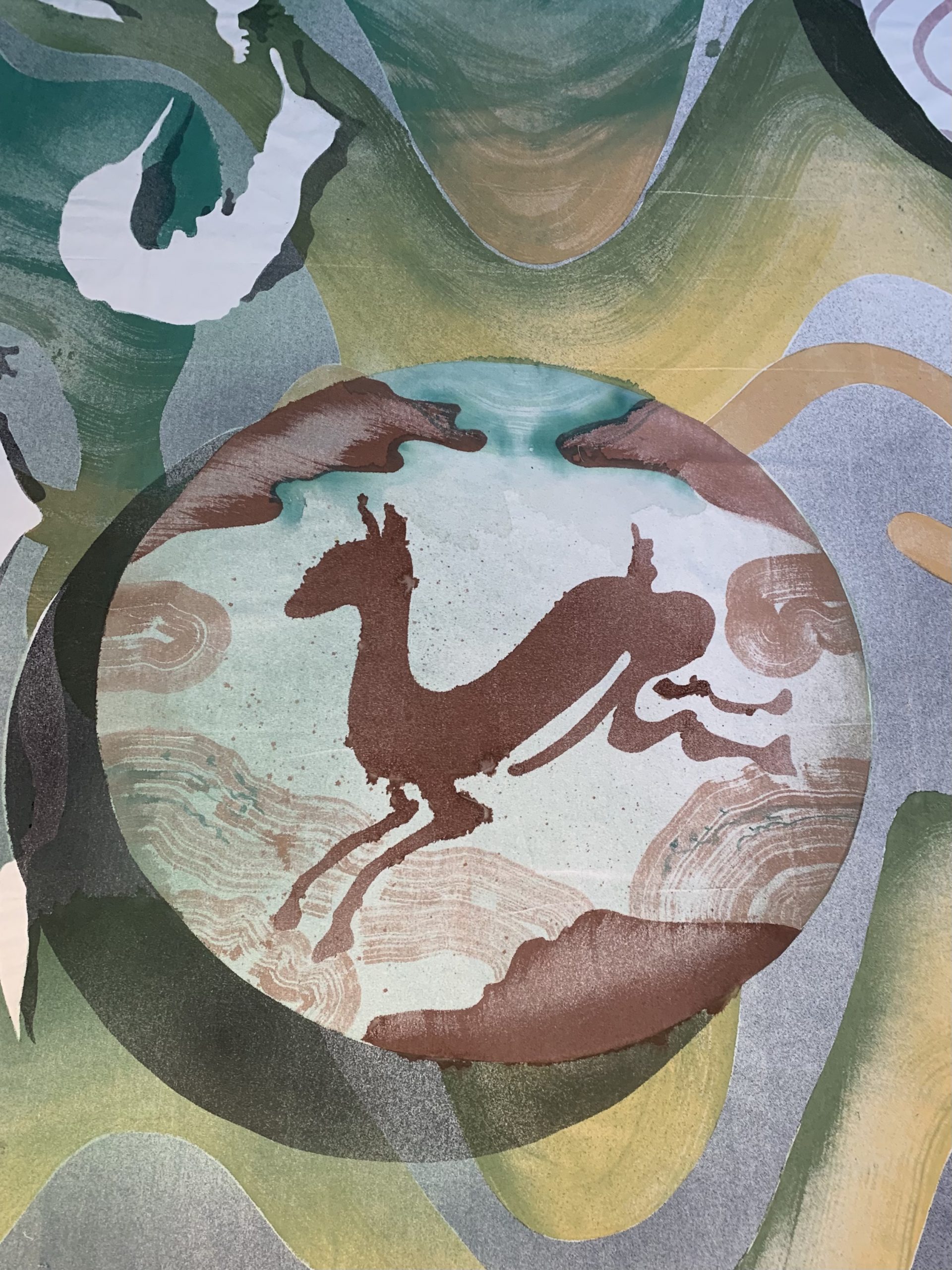